Historic Season For The First Team 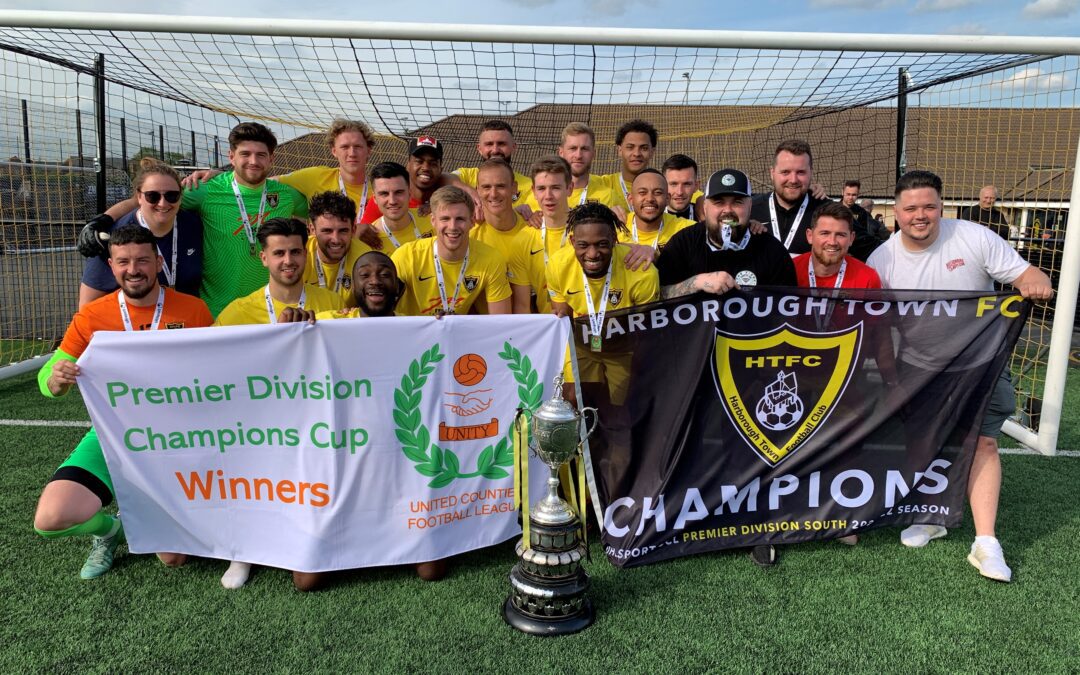 A week can be a long time in football; however, Harborough Town’s First Team don’t want the week to end, let alone the season! On Saturday 23rd April, they contested a keenly fought match away at FA Vase finalists Newport Pagnell Town, knowing they pretty much had one hand on the UCL Premier South Division title. In the end a 2-2 draw was enough as second-placed Hinckley LRFC also drew, so the Bees finished their title winning season amassing 102 points (to Hinckley’s 99), having scored 119 goals and having conceded a miserly 20.  In 38 games.  Quite an achievement and having scoured the 16 leagues that make up Step 5 of the English non-league football pyramid, the Bees have the joint-second least conceded goals (out of 317 teams!).  At the final whistle our jubilant players piled over to their effervescent manager Mitch Austin. The fantastic away support was very much part of the celebrations as the players posed with fans and the trophy. Upon the return to the club, the team were met with a champagne reception, more fans, more singing and a fabulous buffet supplied by one of our amazing sponsors, Avatar Dining. Quite a night was had by all.

Roll forward to Wednesday 27th and Mitch Austin had re-focussed his team and the challenge of the Hinchingbrooke Cup Final vs Potton United. Upon arrival into the Yaxley ground (neutral venue), the players, management and supporters were met by one of the world’s oldest and most substantial trophy. The match itself was a tight affair in the first half, but then the might of HTFC came to the fore and a hattrick by Nat Ansu and the 4th scored by James Ireland saw off Potton 4-0.  More singing, more celebrations, more fan photographs.

And that brings us to Saturday 30th April – and this time Mitch’s team were back at the BeeHive to host the Champions Cup. UCL South Champions vs UCL North Champions. Long Eaton United who clinched the North title with a winner-takes-all match vs Gresley Rovers on Easter Monday were the visitors and they started very brightly. Clean sheet goalkeeping supremo Elliott Taylor was very alert in the 2nd and 30th minutes to keep out the visitors when a goal was more the likely outcome. That galvanised the Bees and just before half-time Nat Ansu played a neat one-two with James Ireland and Nat slotted the ball home. The second half Harborough Town were unplayable scoring a further three goals through Dodzi Agbenu, Rhys Kelly and Sam Hollis, and could have bagged a couple more as the half wore on. Final score 4-0.  Keeping a clean sheet has been Mitch’s teams’ modus operandi this season – and that was made even more special in the Champions Cup as the Premier North Champions had amazingly scored in every game of their season! Of course, both clubs will move upwards in to Step 4 and no doubt we’ll be seeing more of them depending on the league structures which will be released May/June after the FA have established all the promotions and relegations from across the football pyramid.

It has been a season to remember, and the club are incredibly proud of Mitch, his players and management team as well as the Committee, Volunteers and Supporters who have helped contribute to the club’s promotion into Step 4 for the first time in our history. 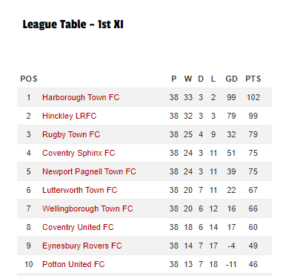