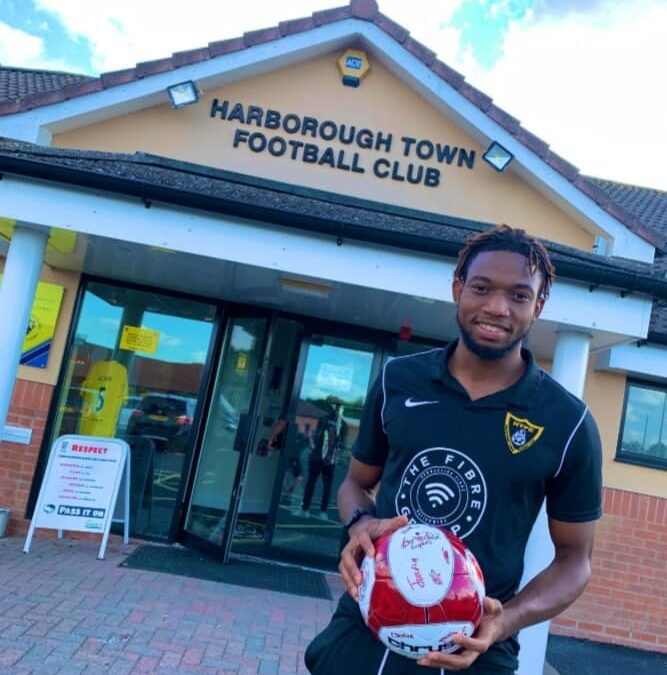 What a return to the starting line up for Harborough Town’s top goalscorer from last season, Nat Ansu who smashed home four goals and topped a man of the match performance in this one-sided FA Cup encounter.

The home side controlled the game from the first minute pressing high and applying pressure to the visitors. It was a back-to-front goal for the opener with Elliott Taylor in the Harborough goal finding Rhys Kelly who’s commanding run from the back combining with Nat Ansu and James Ireland who held the ball just long enough to allow an overlapping Joel Carta to take the ball on the run and chip over the advancing keeper.

Nat Ansu’s first of the afternoon followed a high Harborough Town press after a corner and after a scramble Ansu prodded home. Just past the half hour and another strong run from the back by Kelly finds Ireland who slides a ball through to Ansu who powered past the defender and slots home. On the stroke of half-time Bottesford Town’s Tom Williams finds himself on the edge of the box and powers a first time response firing high into the Harborough net.

More of the same followed in the second half with Nat Ansu netting his hattrick with a low drive and his fourth just before the hour mark with another low accurate shot after terrorising the visitors back line. Experienced Brett Solkhon entered the fray midway through the second half and headed Harborough Town’s sixth and final goal from a Joel Carta free kick.

After two very tough opening games in their new step 4 surroundings Harborough Town will have been pleased to reignite the scoring and game play that fired them up last season.