The rain never really came, the sun shone, the reserves got their league season off to the perfect start, and the First team are into the next round of the FA Cup! Oh, and we were on the radio too!

FA Cup
On a sunny Saturday lunchtime the Bees saw off Rothwell Corinthians in the Extra Preliminary round of the Emirates FA Cup. A goal late in each half along with yet another clean sheet means the first team have booked themselves into the next round, which is a Preliminary Round match vs Biggleswade FC on Saturday 21st August, kick off 3pm. Yesterday’s scorers were Dan Forbes who stooped to flick home a Merson Styles free-kick past the Rothwell keeper in the 38th minute, and then Scott Mooney with a neat control and shot on the turn that sealed the deal in the 88th minute.

Eight goals
Tony Sansome’s reserve team got their league season off to a fantastic start with a 6-2 away win at Yaxley Reserves. Braces from Will Arnold and Alfie Harris and one each from Kai Magee and assistant manager Baz Panter rounded off a very impressive display for the reserves despite conceding in just the second minute! Goal of the match was Harborough’s 5th, with Harris unleashing an unstoppable 20-yard shot after a clever ball around the corner from Panter.

Postponed fixture
Due to an FA Cup replay for our scheduled hosts, Cogenhoe United, the UCL match at Compton Park on Tuesday 10th has now been postponed (re-arranged date TBC).

This coming weekend
With the above-mentioned postponement our first team are next in action vs Easington Sports on Saturday 14th August (3pm) – Easington Sports are located in south Banbury – post code OX16 9DH, approx. 45 miles from Harborough.

The Reserves will be at home this coming Saturday if you can’t make an away trip with the first team, so head down to the BeeHive for a 3pm kick off vs Irchester United.

Reading material
Via our social media channels hopefully you have seen that we now publish an online version of our matchday programme a few hours before each first team home match – of course printed programmes are still available as we know a lot of visitors like a printed copy to go along with their pie and pint – we’re looking for online programme sponsors – if you’re interested: Harborough Town FC | SNAP Sponsorship | Sports Sponsorship

Harborough FM
For the past year or so, Simon Parry from Harborough FM has kindly welcomed Chris from our media team on to his show to give half-time and full-time match updates. Simon Parry’s Saturday Sports Show, 2-5pm each Saturday on HFM 102.3FM. This week was a little more special as with an earlier kick off, it meant Manager Mitch Austin could also be interviewed by Simon during the afternoon – so thank you Simon for the opportunity! 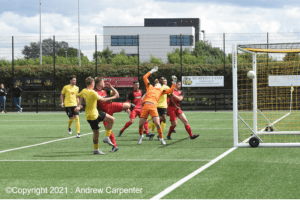 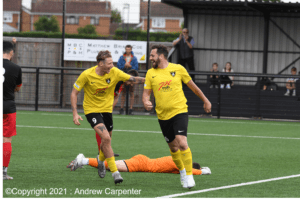